In the latter half of January we hosted  repeat guests that  had been here several other Times; as was the case of Meredith and her group
of awesome people.

For most of them this type of fishing was totally new, and it could also be quite technical as we fish in many narrow channels. Golden dorados are most like salt water species, they take aggressively, fight very hard and produce acrobatic jumps. One of the things I enjoy so much is to see the contrast of the gold coming out of the black color water and flashing that light. Meredith put a lot of effort casting most of the days using top water flies, and mouse patterns were our best fly to fish top water; casting downstream and skating across the channels. Using that technique she landed a beautiful 13 lbs and a 9 lbs in the same morning session.

Other techniques we use is casting 300 grain lines across the channels and swinging like traditional salmon fishing. Right now, with the water conditions we have,  many of the sectors of the marsh allow us to practice this technique.

The days move fast and new guests arrived to share the fishing in this unique place on earth. Terry and Jenifer from Scotland, had big expectations, and were anxious to add a new specie. One morning session I asked Terry if he wouldn’t mind a ride that was farther
than usual, and went far into the marsh. Places where we don’t go very often because of more difficult access. Arriving, I added
a few pound test to his leader, as we were in “big mamas” territory. He started with a nice take on top and was that fast he cannot set the hook. Score 1-0. We continued drifting and casting downstream to a big island and another bite. This fish took the fly so smoothly, but when Terry  set the hook the fish ran downstream and nearly took the whole line. When we saw that big mama jump we could not believe the size. It took a while to bring the fish closer because that area is full of weed and the fish was around the grass. Finally we landed the golden beauty. On the scale it tipped to  27.4 lbs !!! This is a new record for the Lodge.

Will also managed to get a 15 pound fish in the marsh, and Steve and Shelly had an amazing session–with 19 lbs, 16 lbs, and 13 pound fish. Three in double digits.

As the days go on some big summer storms have arrived and made the water level rise and rise, so we are fishing amazing amounts of water.  Water clarity and temperature are still great.

We hope you will come and visit us soon-to see the brilliant gold fish  fly out of the black water! 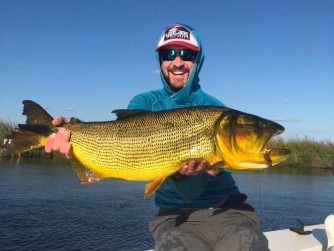 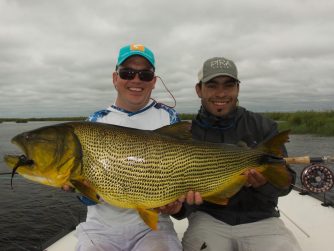 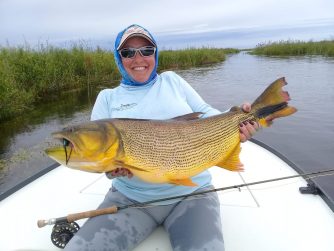 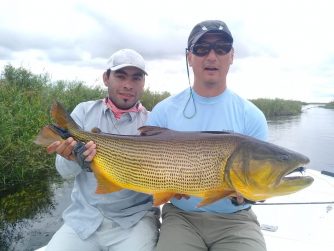 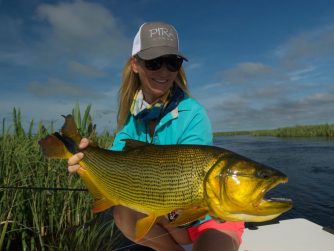 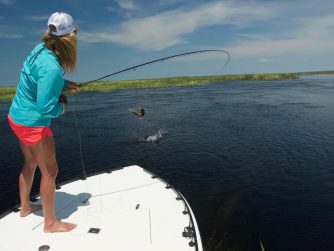 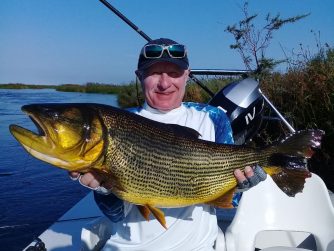 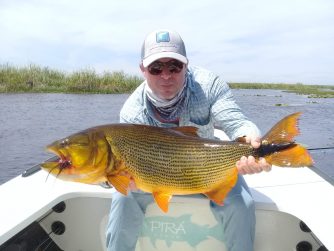 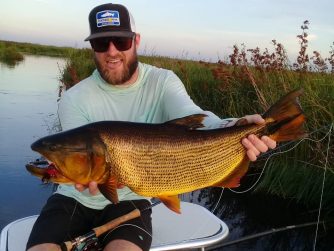 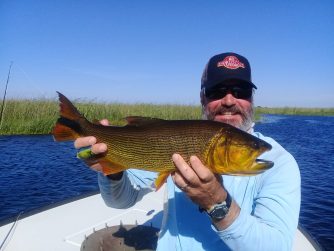 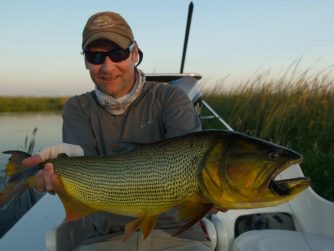 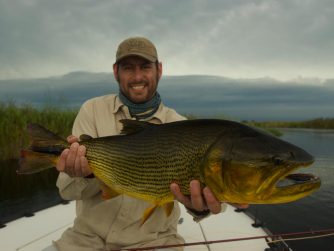 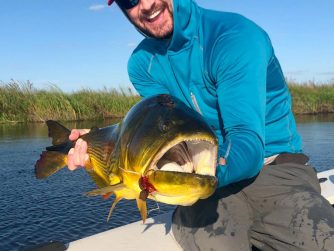