Argentina has a long history of exceptional freshwater dorado fishing. And from the massive Rio de la Plata system to the unpressured wilderness expanses of the Ibera Wetlands, Nervous Waters has been pioneering these diverse fisheries since the beginning.

The characiformes order, found in Central and South America, as well as Africa, consists of more than 2,000 individual fish species. Most are small—less than an inch long. But some reach much larger sizes, including golden dorado and the goliath tigerfish. Probably the most well known species within characiformes is the piranha. At least among the non-angling set.

In exceptional cases, dorado (Salminus maxillosus or brasiliensis) can weigh up to—or more than—30 kg. Generally speaking, however, a 4 to 5 kg dorado is considered a great fish on the fly. Golden dorado should not be confused with saltwater dorado, also called mahi-mahi and dolphin. The two species are unrelated. Golden dorado have also been grouped with salmonids over the years due to the spread of misinformation. This too is simply untrue.

Small dorado populations are found in select parts of the Amazon Basin, but the sprawling Rio de la Plata shines as a massive, multifaceted stronghold for the species. Flowing through parts of Argentina, Brazil, Paraguay, Bolivia and Uruguay, the basin is the second largest drainage system in South America, and one of the biggest in the world. Its diverse ecosystem envelops freestone rivers in the mountains, as well as marshes and lagoons in the lowlands—a system that goes from freshwater to freshwater, as opposed to the sea.

The Rio de la Plata was once called “The Sweet Sea”—a reference to its oceanic size. And today, dorado rule this diverse environment; an apex predator with a wide range of behaviors and moods influenced by seasons and habitat. Dorado can be complex, and deciphering the challenges is what keeps anglers coming back. That, and of course, the dorado’s beauty, ferocity and acrobatic tendencies. Combined, these prized attributes make freshwater dorado one of most distinguished gamefish you’ll find anywhere. 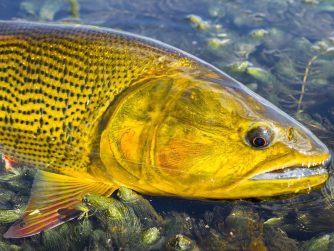 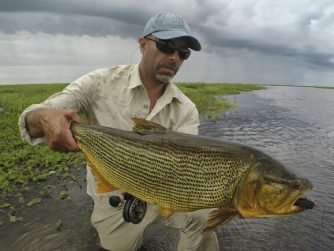 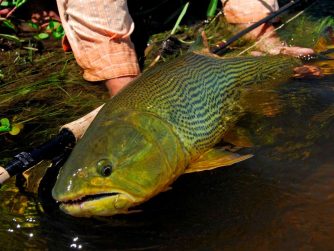 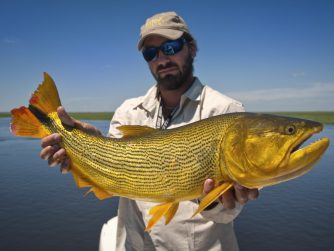 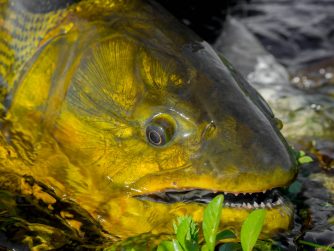 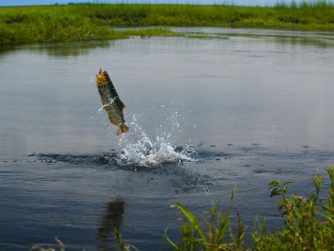 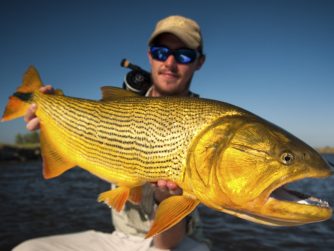 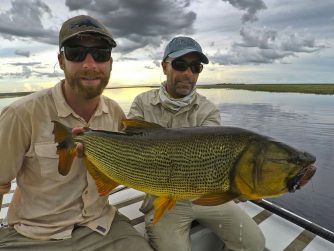 Dorado exhibit predatory feeding behaviors, mostly attacking minnows (sometimes not so small), frogs, mice and other creatures that are best represented by larger than average flies and lures. Appropriate tackle is key. And fly fishers used to trout or salmon fishing will do fine with well balanced rods, fly lines and leader. The standard dorado outfit ranges from 6- to 9-weight rods—depending on conditions, river size and the average weight of the dorado you will be targeting.  Typically, 7- or 8-weights make the best all-rounders.

Throughout the system, we fish both floating and sinking fly lines. Tropical rated lines are the best. The basin also offers a mix of boat- and wade-fishing opportunities. That said, wade fishing rarely involves wearing waders. Wet wading is the rule. Specific exceptions are usually announced in advance.

Dorado fishing is not a numbers game. Generally, success comes with patience and practice. Dorado may have a reputation for attacking anything unlucky enough to swim into striking range. But in truth, those feeding frenzies can be few and far between. The thrill of fooling these smart fish, on any given day, across an array of conditions, is what makes dorado fishing so special.

In recent years, dorado fishing has become increasingly popular. The internet has also helped spawn many spontaneous experts—some credible, and some not so much. We recommend doing your homework in order to separate the good, the bad and the ugly. With dorado there’s a deeper meaning lying under the layers of commercial noise. When you find it, you’ll know it.

For more information on the technical aspects of fly fishing for dorado, visit the Nervous Waters website today.